Thanks To Canal Connections... 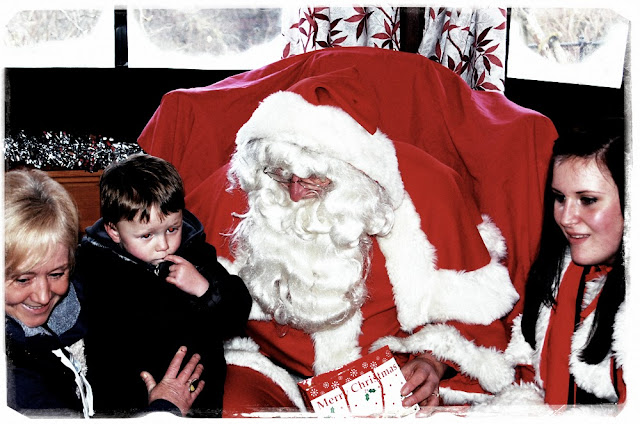 I was in a bit of a jam. I needed help as Rudolph was a bit off colour. Canal Connections offered me a lift on one of their boats. They picked me up at Granary Wharf at the back of Leeds railway station on one of their boats. Could this be true!! I was in the middle of Leeds. We travelled along the River Aire at 12 midday on a Friday Lunch time – I could not believe what I was seeing.
We passed Asda and saw a few workers taking some time out for a cigarette – I could not resist waving and shouting Merry Christmas – sheepish waves were returned – is that because they were having a cig “behind the bike shed” ! or just could not believe that Santa was passing on a boat -  which was more unusual? a moving boat or Santa?
We approached Victoria Bridge – iconic landmark bang in the centre of Leeds. On the bridge a group of young high achievers, business people laughed and waved  - on their way to a christmas office party?
I looked to the left and saw a multitude of rubbish collected against the bridge – street cones, take away boxes.  I looked to the right and saw a kingfisher – sat on a branch ready to pounce on an unsuspecting fish. We passed under the bridge and the kingfisher swooped in front of the boat, its beautiful colours glinting in the sunlight. It landed on a branch in the mouth of an underground water  drain. 10 yards further along I saw a “rough sleeper” huddled in his sleeping bag under the cover of an arch. I waved but could not shout Merry Xmas.
A short trip on the boat but showed so many images of Leeds each not seen by the other.
We continued along passed bars with closed doors and windows facing onto the waterfront. We passed many iconic residences with balconies overlooking the waterfront but could only see 4 people to wave to. I waved to the passing crowds walking on the waterfront but it amounted to less that 2 dozen !
The rest of the trip raised similar question marks as I went to my grotto at Thwaite Mills where a “room for the night” had been set at the visitor moorings.  There was no room at the Inn – 2 fishermen had beaten the boat. 1 laughingly gloated “we beat you here” the other dangled his 6 metre pole in the centre of the navigation as if goading the skipper to alter his course – moving it at the last second and muttering obscenities.  I could not wave and wish a Merry Christmas.
We did not stop at the visitor mooring but glided into a quiet spot.  I asked the skipper if there was something he would like for Christmas. A quiet reflection “ Today we are celebrating Nelson Mandelas life. I would love to bring meaning to his speech – “If we can learn to hate why cannot we be taught to love”.
The waterways are a wonderful resource in the centre of our city – “surely there is room for all to learn, to relax, to enjoy?"

Posted by Canal Connections at 04:28