“What better way to introduce our pupils to the Industrial Revolution. This will bring history to life. It will introduce them to the heritage of Saltaire; 1 of 2 UNESCO World Heritage sites in Yorkshire”

I took Alan down the road from Seacroft, a severely disadvantaged community but the school has a very strong community development focus, to Thwaite Mills. A ¼ hour journey but it was like walking into an oasis. The mill buildings in various states of maintenance but set in massive grounds, contained on an island and access by bridge across the navigation. Pupils were shown how the water wheels operate; the blacksmiths forge which is still in use and the grounds that had evidence of conservation and environmental work.

“What a fantastic resource”

And the project unfolds…

“This is such a unique event we should film it”

The pupils at DYCA have different levels of motivation, skills, interests and ability so they would perform different aspects of the project.

Sapling cutting – the Prince’s Trust and Duke of Edinburgh’s programmes which are used for pupils who learn better by non–traditional methods. The physical task of cutting back was mixed with a general clean of rubbish of the towpath.

Lock setting – the Combined Cadet Corps. “They are used to operating as a team, they will do whatever you ask them to do and they can be relied upon to do it well”

Documenting the event - Media students – “They have some really good kit. They can film the start of the journey”

Film extras – Drama students – “They will dress up in costume”

The pupils had to understand the importance of what they were doing and Adrian from the Society gave them a lesson explaining how they fitted in.  Canal Connections gave a days training to prepare the students in lock and bridge operations. Rachel from Aire Action gave them an induction in Health and Safety prior to carrying out the vegetation work. 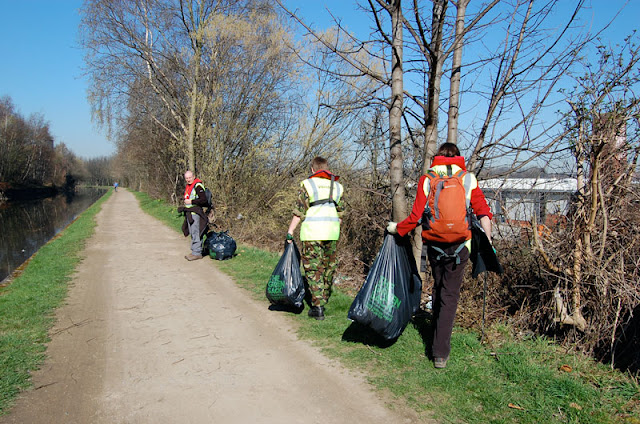 Posted by Canal Connections at 13:44